TOP front end technologies in 2022: choose the right one for your digital product

Are you ready to develop your advanced tech product? Check out this article about TOP Front End Technologies and choose the right one. 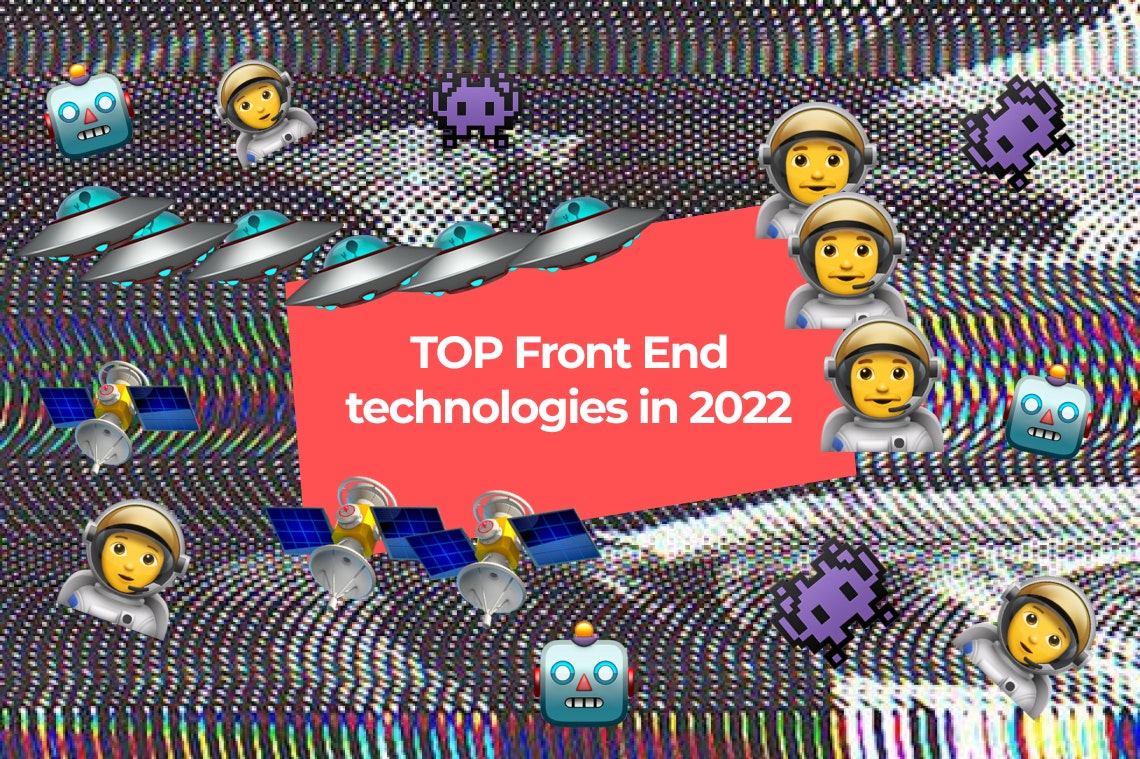 Everywhere around the world of software development, front end specialists are in demand. Regardless of the platform, convenient and functional interfaces take a lot of time to finish, so they are developed separately from the actual software part.

A generalist Full-Stack developer might be enough for small projects but the large ones never rely exclusively on full stack devs.

Depending on the purpose of an app, the tech stack suggestions will vary.

For example, instead of using solutions provided by some third-party SaaS company, a mature business might arrive at a decision to build their own app: free to use, perfectly tailored to their needs, and possibly a source of profit.

What is front end development?

Every software product can arbitrarily be divided into the part that does all the computations under the hood and the part that faces a user.

So what does a front end developer do? They focus on the interface. It is not true that this role is easy to master and involves no coding. Front end coding is usually less complex than the back end indeed, but it's no different otherwise.

The difference between front end and back end is that the latter deals exclusively with server-side computations.

Thinking about the front end of a website as merely a decorative facade is a mistake.

Choose the best tech stack for your project with Voypost!

Voypost knows how important the front-end part is for customer experience. In order to engage more clients, you need to decide on the right technology. Find the best solution on a consultation at Voypost!

A lightweight website (or an app) may have no back end part at all. In this case, front end engineers have to take responsibility for designing the whole front end architecture: its visual components, adaptive or responsive layout, and code.

For the reasons mentioned above, it is inappropriate to set up “front end vs back end developer” battles. It depends on the scope and purpose of a given project, whether or not both roles are necessary for the team.

Best front end languages and technologies to use in 2022

JavaScript is the forefather of all web development languages and frameworks. An enthusiastic professional can easily build a pure JS website. The use of pure JS has its reasonable limitations. When dozens of libraries and development frameworks lay around within immediate reach, no one wants to reinvent the wheel.

Which is why strong knowledge of HTML/CSS and JavaScript is not enough in software development best practices.

React Native is an open-source mobile app development framework. Although it is community-developed, the Meta (formerly Facebook) team spearheads the development effort.

Flutter is being developed by the Google team, using their own Dart language. On the one hand, the use of a custom programming language limits access to ready-made components. On the other hand, Dart addresses the drawbacks of JS, improving safety, scalability, speed, and comprehensiveness of an app’s codebase while retaining syntax similarity with JS.

Like basically any new programming language that appeared in the recent decade, Kotlin aims at making a significant change in the domain of development and front end technologies in particular. Kotlin has been gradually gaining more attention since the release with a sharp spike of searches in 2017 when Google adopted it as the official Android app development language.

Vue and Angular are the other two JS-based frameworks (beside React). Angular is a Google-supported open-source framework that uses TypeScript. Both React and Angular occupy the top spots in the best web development frameworks rankings, according to Stackoverflow’s professional developers. Although Vue falls behind, it is recognized for its comparable simplicity and suitability for small-scale projects. As you look at the stats of most loved frameworks, Vue ranks higher than Angular, still giving way to React.

Mobile app development has its unique restrictions, such as the display size and productivity of mobile devices. The state of affairs is further complicated by specific OS restrictions.

Flutter is commonly compared to React Native as its closest rival. But, as a business owner, one should look for the availability of talent, project costs, and experience in similar projects rather than the seeming attractiveness of particular front end technologies. The general language features and productivity benchmarks are inapplicable in individual cases.

The same goes for Swift. Although it is safe, readable (thanks to strict syntax), and fast, the scope of its application is limited to Apple products for now.

Kotlin is better tailored to Android devices, although it works with any device that runs Java Virtual Machine. Kotlin introduced a number of improvements over Java, such as null pointer handling, functional programming support, coroutines, and more.

Web browsers process JavaScript on the client-side, so any JS-supporting framework is suitable for web development. Here are a handful of technologies that have gained renown for their efficiency.

React, which was mentioned above, boasts an impressive library of ready-made components and functions. The custom JSX markup language, which is based on XML, introduces an additional barrier for those who wish to switch to it though.

Vue framework has inherited React’s JSX and some of the other essential features, leaving out the trinkets and baubles rarely used in the majority of projects.

Google-backed Angular firmly occupies the spot on the top-10 list, yet novice programmers are discontent with it, going for fresh solutions like Svelte instead.

Angular is hard to master. Nonetheless, SMB (100-1000 staff) and large business (1000+) employees report using it more frequently than both React and Vue.

The purposes of software products vary. Front end development languages and frameworks must be chosen accordingly. Database management tools or other data aggregation apps (used in retail, for example) require the most basic frameworks, entertainment apps have their own range of special capabilities, and so on. The niche of application and the target platform narrow down the choice of frameworks.

Desktop and embedded applications may be developed with Qt/QML or MS Visual Studio. Any of the front end technologies that are packaged into the frameworks mentioned above will do for web and mobile apps.

The preference of a particular framework is often a matter of habit and personal familiarity. Electron, for example, provides the same good old HTML/CSS and JavaScript toolkit.

The novel solutions that target specific frameworks’ inefficiencies appear from time to time, and enthusiast developers immediately try them out.

The mastery of code and abstract thinking are not the only must-have front end developer skills. The emphasis on the importance of soft skills is connected to the rising complexity of projects where efficient teamwork is necessary.

It goes without saying that high communication skill largely defines the speed of development, the frequency of failures, and the quality of a project is general. This skill is paramount for team leaders and developers who communicate directly with product owners.

Being open, imaginative, and creative helps to solve complex non-trivial problems and comes at a price: such a developer may be defiant or misunderstood by colleagues.

Empathy is invaluable for emotional support and leadership.

It is a certainty that you’ll find a team with a perfect skillset for the job at hand.