How to develop a functional app, and other tips for startup owners about Android and IOS development. 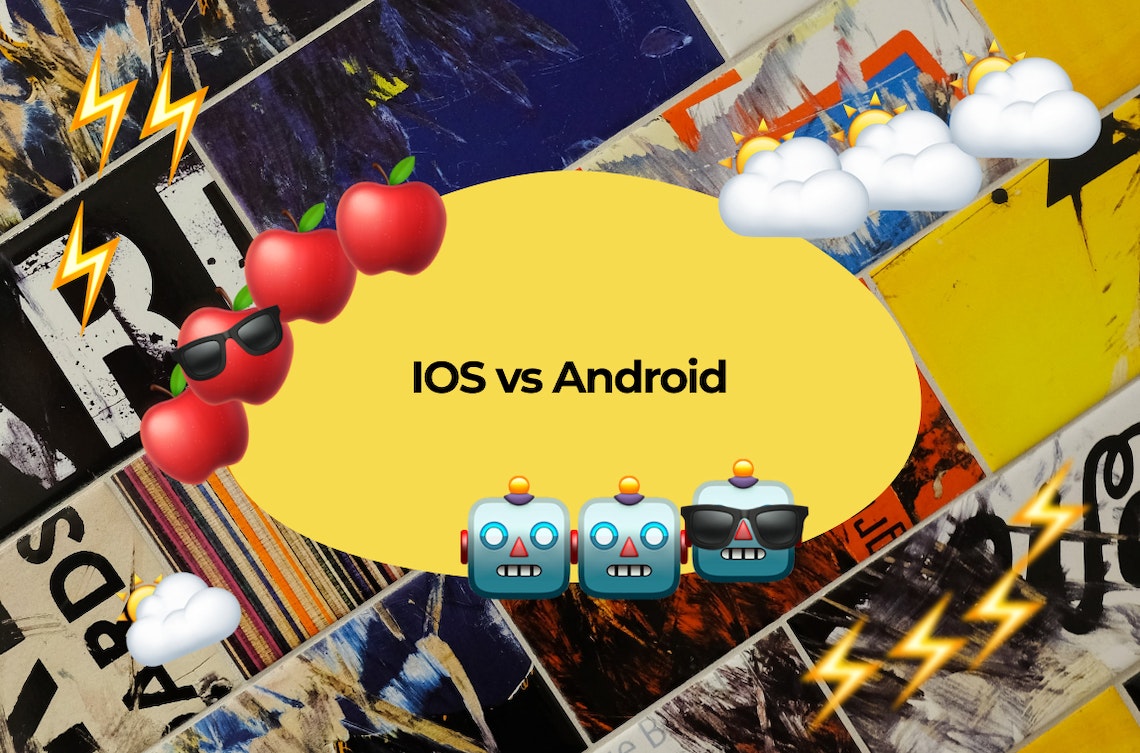 If you're thinking about developing smartphone apps, you have nearly limitless possibilities in terms of what you can bring to life. You are only limited by your creativity in this regard. However, when it comes to choosing a platform for your app, you really just have two options: iOS and Android. While there may be some other solutions, these are the market's two monsters. We have created a guide to help you decide which one is best for you and how to build a greater app in general.

Just like any other platform, iOS mobile development certainly has its pros and cons. Having said that, you should not consider a single negative to be the be-all and end-all. If you have the proper team, there are definitely alternatives that are doable. The same is true when it comes to advantages. To put it clearly, while determining which platform is best for you, you must adopt a holistic view and analyze all facts.

Apple is obviously doing something right if it has such a large number of devoted users. One of the most important things Apple has going for it is user loyalty. Having said that, you have a huge user base to offer your product to. From a development standpoint, they provide a terrific simulator, which means you can construct an interface for some capability and then basically duplicate or mimic it on another device. This makes it extremely easy to test and debug code…

Another item we enjoy is the user interface design. One of the best features of using an iPhone is just how straightforward and intuitive it is, and this all goes down to the user interface. It needs to be figured out to the smallest detail, and Apple definitely accomplished it. Finally, we'd want to discuss fragmentation, or the absence thereof. So, when we think about Android, there are a multitude of them, and you must consider whether or not your application will work on all of them. With iOS, you just have the iPhone, albeit you should consider possible version difficulties, such as whether an app designed for the iPhone 12 would operate on the iPhone 13. That sort of thing.

Without any doubt, iOS has flaws. For starters, even if you have a brilliant idea for iOS, hiring an application developer with the right competence and application software may be highly expensive. That is something that must absolutely be considered when thinking of profitability. Also, even if the app is done, it's unlikely that you'll be able to publish it to the App Store immediately. It takes time for them to assess your program to ensure there are no viruses, that it complies with their user rules, and so on. Finally, consider customization. You may have a very clear idea for your application, but making it a reality might be tricky.

Development is expensive, which is why the cost is frequently at the top of the list of the primary concerns clients have when looking for the cost to build an app. Regardless of how complex they are. Having said that, rather than concentrating just on how much it costs to make an app, try to see the whole picture. We’ve already discussed the expense of developers, but there are also certain aspects and nuances that will make your app distinctive but will take time to build.

Whether you intend to produce the most expensive app on the app store or a simple app, you must first undergo an exploratory phase in which you determine the market fit for your application and many other things involved in how to develop an app. Then, in addition to hiring an iPhone programmer or considering the app development price, you will need to produce an MVP that you can exhibit to potential investors to obtain a rough concept of whether or not your product is viable.

Because iOS is so common in the United States, many people believe that Android takes a back place not just in terms of user numbers, but also in terms of profitability. The reality is that Android has its own fan base and is quite successful outside of the United States. As a result, you should not be deterred from embarking on the process of custom mobile applications development for Android. As you may expect, the Android programming languages differ. It uses Kotlin or Java, whereas the iOS programming languages are Swift and Objective-C. However, Android is unquestionably a viable platform for producing complex products such as the Stepes app, as well as relatively simple apps.

One of the most significant advantages of Android is its excellent security. This is something that people are continually concerned about, and you must convince them that your program is safe and was not created with AppMake or something similar. Furthermore, the code is open-source. How significant is this? Consider the case of someone who has an outdated version of an Android device. You can continue to maintain an app for an older version since the code is open-source. This is something that the iPhone might not have.

In terms of publishing, it’s much easier than with the AppStore. You can get your app on the Play Store much faster. That's not to think that Android has certain steps. They just accomplish things at a much quicker pace. Finally, let's take a look at Android's fragmentation. A variety of devices provide you with extra possibilities. The more alternatives you have, as any smart developer will tell you, the better.

Regardless of how good the technology in your devices is, a smartphone or other device operating the Android OS will need to be recharged on a regular basis.

This is because the software does not store any of the hardware resources that are made available to it. The disadvantage can be mitigated in part by adjusting the power settings and deactivating superfluous functions, but only in part. Some users even buy two chargers, one for home and one for work, so that they are always available. Active users joke that with the introduction of an Android smartphone or tablet comes a new obligation: charging your gadget every day.

Updated versions of the operating system frequently clash with outdated devices that have been removed from the market or devices introduced by mysterious "Chinese" makers. So it turns out that following the update, the phone starts behaving weirdly - the battery runs out rapidly, it freezes, it reboots, and so on. You must force a rollback to the previous version and disable auto-update.

It will be difficult to determine the app development cost, just as it was when we looked at iOS apps. There will be expenditures involved if you want to build one of the top Android apps available, which is understandable. Keep in mind that you get what you pay for. Instead of worrying about how much it costs to make an app, it would be a much more efficient use of your time to investigate all of the processes involved in mobile application development to ensure that you are not cutting corners, that you are doing everything correctly, that you have the necessary resources to get the job done and many other aspects. The last thing you want to do is have to redo some shoddy coding work.

IOS vs Android Applications: Which one is best?

The very first image of software created by Steve Jobs was somewhat different from the current greater thoughtfulness. But even today, we can say with full confidence that IOS is still a more thoughtful system than Android. IOS is an easy way to interact between a person and a mobile device. This system will always tell you about itself and show you what to do in an incomprehensible situation. Every person can master it the first time. What can not be said about Android, to which you must first find an approach and a common language. The big advantage of iOS is the leader in the number of available applications. All new applications most often become available first on iOS, and then on Android.

Of course, it's worth mentioning that Apple supports its devices much longer than all other manufacturers of Android devices. For example, the iPhone 4, which was released in 2010, could have upgraded to iOS 7 in 2013 with complete confidence. But mobile devices based on Android, released in 2010, no longer represented anything worthwhile in 2013. Although this is a rather controversial issue. Take, for example, the Nexus 5X smartphone. I am more than sure that in 3 years fresh Android updates will continue to arrive on it.

Throughout its life, Android has been a catch-up system in relation to IOS. But Android also has virtues that IOS should be taught. For example, on Apple mobile devices, the ability to quickly connect to wireless networks has only recently appeared, which users have been missing there, and on Android devices, this feature has long been used.

From the customer perspective, they love the Apple ecosystem. It's more like a connection because, over the past few years, Google has become much better at integrating its services across devices. Despite this, Apple products such as the iPhone, iPad, Apple TV, Apple Watch, and Mac computers are tightly integrated with iCloud, iMessage, FaceTime, and other native services. While Google has its own competing services that work great too, they're not as tightly coupled. Some apps required to access core Google services are not pre-installed, so users are forced to look for them in the Google Play Store. For most of us tech-savvy users, this might not seem like such a big deal, but for some, it can be a daunting task, or at the very least annoying.

Having said this, many people think that Apple is a sect that pulls you into its arms and never lets anyone go anywhere. On the one hand, this is true, but only in part. The company's own ecosystem is really addictive, but there are also cross-platform ecosystems that allow you to move from one platform to another. I myself use Apple products, but only those that I like. At the same time, I am always ready to refuse it if something goes wrong. It is this behavior that is reflected in the study, which suggests that users are not as loyal to the Cupertino company as is commonly thought.

Trust Voypost for Mobile App development for iOS and Android

As you can see from all of the information presented above, there are many things you need to factor in before ultimately making a decision in terms of which platform to choose. If you need help deciding, you can always turn to a trusted and experienced software development company like Voypost. We have extensive experience with custom mobile applications development for both platforms and provide you with the needed consultation you need and then make your dream app a reality. Say "Hi" to us today to learn more about how we can help you!